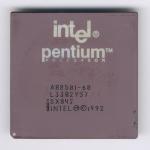 This site is trying, on the first hand, to enumerate all different existing models of x86 cpus (see Search menu), to make you discover their history, their characteriscs and their visual or electronical specificities (see History menu), and on the other hand to put my own collection online, with now 9521 different cpus.

Adding of VIA Nano in cpu database

Addings of all differents Pentium 4's Sspec in cpus' pages