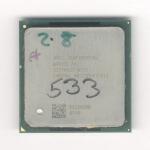 This site is trying, on the first hand, to enumerate all different existing models of x86 cpus (see Search menu), to make you discover their history, their characteriscs and their visual or electronical specificities (see History menu), and on the other hand to put online different collector's collection, with now 21043 different cpus.

All (I think) NEC 8085 cpus have been entered in database and can be used for collections.

Intel plans to release a new Dual-Core Pentium based on Clarksdale core, the Pentium G6951, probably for end of May 2010. The only difference from G6950 should be a higher GPU clock (733 instead of 533MHz ?)

Adding of an article on IDT

Adding of an article about Mitsubishi Straker

Site is now translated in Russian language. Big thanks to DamnBeavis for his great work.

All (I think) OKI 8085 cpus have been entered in database and can be used for collections.